We all make them. 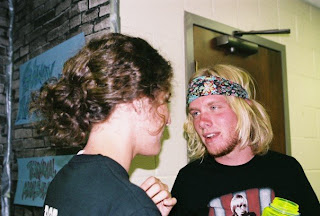 (This picture, taken by Sara, captured a little argument between Colt and me.  Yes, it's from the summer of 2007 and yes, we look awesome.)

I know we've only been married almost 3 years, but I would venture to say that a good chunk of marital arguments stem from making assumptions about one another.

On Sunday, Colt and I were at different churches.  He lead the music at Our Lord's Community Church and I played/sang with my family at Council Road Baptist Church.  I told him that we'll just keep each other updated on what the lunch plans are.  We knew that eating with our friends or eating with my family were both possibilities.  After church, I called him to figure out the plan.  No answer.  He called me back a little bit later and said that we should just eat with my family.  I expressed that I still was unsure of what my family was doing since we were all spread out, talking to different people.  He got a bit frustrated since he was already driving and had no idea where to go.  I got a bit frustrated because I thought it was a bad idea to be driving when you have no destination.

Assumption #1:  Colt assumed that since I spent the morning with my family, I would have discussed the lunch plans and had an answer for him.
Assumption #2:  I assumed that Colt wouldn't start driving around when he hadn't even gotten a firm answer from me on where to go.

Gosh, it sounds simple (and stupid) when it's typed out.  Anyway, arguments are no fun.  But, arguments when you're hungry AND driving in the million degree weather are really not fun.  It lasted way too long, but yes, we finally did resolve our issues and we still love each other.

That night, we hung out with some friends downtown for the Twilight Concert Series.  My friend (who will remain nameless because I didn't ask her if I could tell this story) was talking about how she had asked her husband to get her a bottle of coke to bring to the concert that night.  He walked into the house with a 1 liter bottle of coke.  His reasoning was that this bottle was just 10 cents more than a little bottle, so he wanted to make the most of his money.  Well, she wanted something she could drink in one night and she assumed he knew this.

Of course, no one is really right or wrong in any of these situations; they're all just miscommunications.  They sure are funny to laugh about afterwards though.

Although assumptions can really screw things up in the moment, they certainly are not forgotten by either party.  I can tell you this:  Colt will never bring home white rice from a chinese restaurant again.  He will forever hear in his head, "You didn't get me fried rice??  If I wanted white rice, I would have made it myself!"  See, we're all just learning more and more about each other every day. :)
Posted by Claire at 4:00 PM