I just had one of my most favorite kind of weekends.  A weekend of being lazy and doing nothing.

Friday night we made a yummy dinner. (It was one of our e-mealz recipes.  I'll have to tell you how that's going later!)  This was followed by peanut butter chocolate chip cookies and coffee. 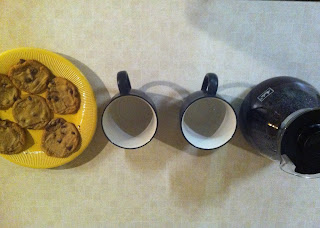 Saturday, our piano tuner/fixer guy had to come work on a few things.  He tuned it and fixed our low D and F#, which weren't playing.  When you teach little kids, they remind you every week about the notes that won't play.  So, I'm glad that's checked off the list.  After that, Colt and I ate breakfast during Duke's first nap, which we're finding is a great idea on Saturdays.  We spent the rest of the day laying on the couch, eating, playing Cathedrals (a new game we love), drinking hot tea, and listening to Alison Krauss. 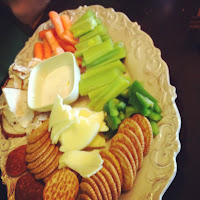 On Sunday, we went to church.  It's funny.  How I feel after church is largely completely dependent on how Duke does.  If he doesn't stay asleep, wants to eat early, is extra fussy after eating, etc. then I say irrational things to Colt like, "I'm never coming to church again!"  But, these comments are always followed by me attending church the next week.  I guess I'm just not as hardcore as I think I am.  Anyway, I've got to learn to stop saying stuff like that.  I know Colt would appreciate it.

Last night we watched The Grammys with the Suarezes and Chambers.  This was the first time for all of us to be together with our 3 kids, making it a combined total of 9 people.  (I just thought about saying "9" to the hostess when arriving at a restaurant.  9!  But we know that won't be happening anytime soon.  Oh, and it'll be "11" in a few weeks anyway ... so it really won't be happening anytime soon.)

Well, we had a wonderful weekend and the snow last night was a great way to end it! 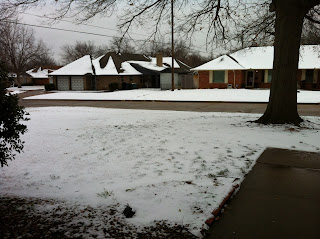