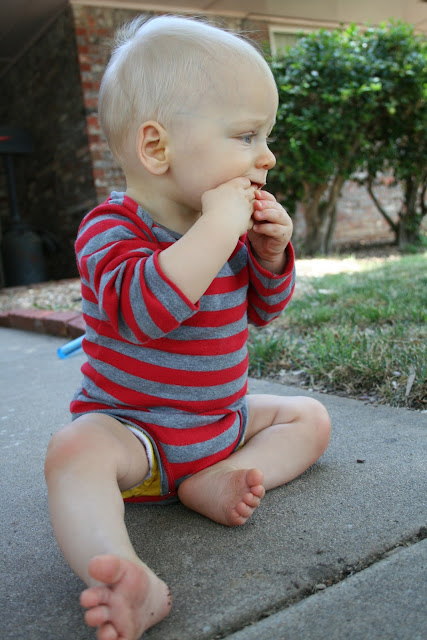 When Duke displays some sort of behavior that isn't his norm, I can pretty much arrive at one of two conclusions:  He's going through a growth spurt or he's teething.

In both instances, Duke has done some (or all) of the following:

There are certain times that growth spurts are "supposed to happen."  Of course, babies are babies.  They can do whatever they want whenever they want no matter what Google tells you.

Right around 8 months, there was a week when Duke wanted to eat 6 times each day rather than 5.  He woke from his morning nap after 1.5 hours.  This was not normal, as he was used to sleeping 2-2.5 hours.  Then, he woke up after 45 minutes of his afternoon nap.  Again, this was unusual.  Waking up and going back to sleep is one thing.  Waking up, crying, and wanting to be fed is another.  He was legitimately up and legitimately hungry, so I fed him.

In my experience, waking early from naps is one of the biggest clues of a growth spurt.  Now, don't get me wrong, sometimes babies just wake early from naps because they want you to lose your mind.  Maybe a loud noise woke them up or maybe they're just up to be up.  If that's the case, you can problem solve for the issue of waking early.  (Check out my nap issues post.)  If they're up because they're hungry, then they should eat.

We've obviously experienced growth spurts before with Duke, but I didn't keep track of exactly what he did.  Since I was thinking about it this time around, I thought I'd record his schedule.  This is what naturally happened the first day of the growth spurt:

The following days looked pretty much the same.

Right after this week-long "growth spurt," he popped a new tooth.  So was it really a growth spurt or was he just teething?  Well, if it was a growth spurt, I met his need.  If it wasn't a growth spurt and Duke was just waking early due to teething, then he got some extra calories.  It's a win-win situation.

If you think your baby might be going through a growth spurt, let your baby set the schedule for those few days.  Then you can return to normal.  Trying to avoid a growth spurt or pretend it's not there won't help anything.  It'll just make it last longer and you won't be providing your baby with what he needs.  In the same way, if your baby is teething, expect a few changes.

This is one of those times when I'm so grateful to not only have a schedule but a routine as well.  No matter how "off" his schedule gets, we can always fall back on routine.

I'd love to hear from some other moms on this.  How do you deal with growth spurts and teething?  Any tips/tricks?  What cues do you look out for that indicate your baby is going through a growth spurt or teething?
Posted by Claire@MyDevising at 9:31 AM