I have enjoyed my past several days here even though they have been absolutely cRaZy.  In fact, they've been so crazy that I felt the need to type "crazy" like a 7th grade girl on AIM.

I told you I was heading to camp on Monday to get Colt.  I arrived safely there around 4:30 p.m. and got to hear the boys (plus Karlie) play their last evening service that night.  Duke really enjoyed it and sang along with his "da-da"'s and "na-na"'s.


We left camp and got to Kansas City around 1:00 a.m.  Duke was crazy, but I really don't blame him. Since he started sleeping through the night at 2 months, he hasn't had a reason to be up in the night.  He was very confused.  We put him in his Pack N Play and let him cry it out for about 20 minutes while we took showers.  This kid was mad.

I thought about nursing him back to sleep and then I remembered that I've never nursed him to sleep.  Not sure why that thought even crossed my mind.  So I got him out, held him, and then Colt I decided to do something I never thought we'd do.  We put him in the bed with us.  Because of all of his rolling, Duke easily took up more than half of it.  Good thing it was a kingsize.

Although Colt and I were exhausted, we were both instantly hit with a new burst of energy.  It was dark in our room, but the moon was creeping through the curtains creating a bit of light.  We could see Duke's little face as he looked at Colt and I on either side of him.  He was in baby heaven.  He was babbling non-stop and making the sweetest noises.  We got to that in-between sleep and awake phase a few times but it wasn't long before Duke would whack us on the face or gouge our eyes out with his nails.  (He's a bit overdue for a fingernail trim.)

We got up Tuesday morning and headed to Minnesota. 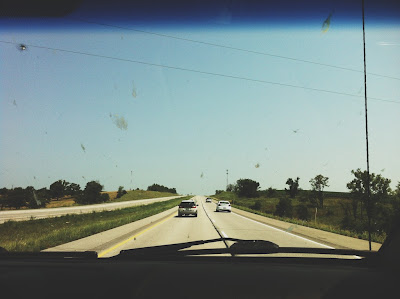 I have to share a little incident that happened in a Walmart parking lot before we got on the road.

We were backing out of our parking spot and at the same time, Colt's parents were backing out of theirs.  Colt honked the horn to alert them and his dad stopped.  We were promptly greeted with a woman at our driver's side window.  The conversation went like this:

We drove away laughing and hoping she saw our license plate.

We got to St. Paul a lot sooner than we had planned.  I actually think traveling with a baby goes faster than without one.  (Side Note:  I did not say "easier."  I said "faster.")  We only stopped once - when we ran out of gas and Duke needed to eat. 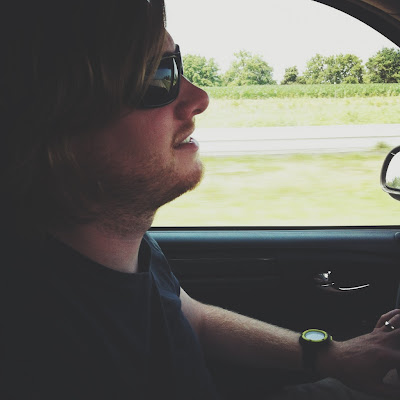 We got to the Mall of America and hung out for a bit before going to Colt's Aunt and Uncle's home.  As we walked under the roller coasters, I had a little flashback to this moment.

The next day (Wednesday)  we went to a cabin on a lake to see/meet some more family.  We left Oklahoma thinking we'd get a little break weather-wise but it turns out, these past few days in Minnesota have been some of the hottest.  But, I won't complain.  96 degrees is always better than 100+ degrees.

Duke met our second cousins' babies.  (Does that make them third cousins?  Fourth cousins once removed?  I don't understand that business.)

We stayed in a hotel that night and for the first time in our lives, Colt and I did not see fireworks on July 4th.  (And don't start making me feel mom-guilt about Duke not seeing fireworks on his first 4th of July.  He wouldn't remember them and he probably would've cried.  Right?  Right.)  I mean, we love 'Merica, but we love Duke more.  We had been dragging that kid all over the place and he deserved an appropriate bedtime.

After showering and putting Duke to bed, we ate ice cream and watched Grey's in bed.  (Being in a hotel makes you do crazy things like that.)  We slept like rocks and the fireworks finale didn't even phase Duke.

It seems like the theme of these past few days is "crazy."  And yes, yes they were.  It was a hard 3 days of traveling but at least they were successful. 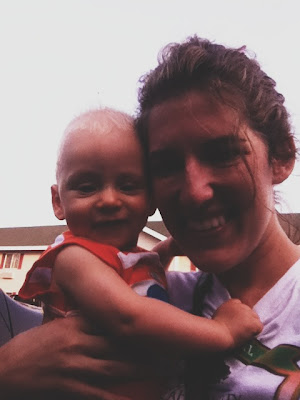 Yesterday, we relaxed, drank lots of coffee, and played Nerts. 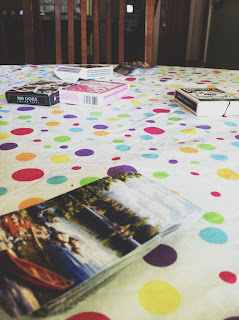 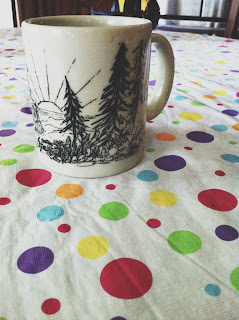 That's all we did.  And it was glorious.  Looking forward to another fun day with family in Minnesota!
Posted by Claire@MyDevising at 11:37 AM