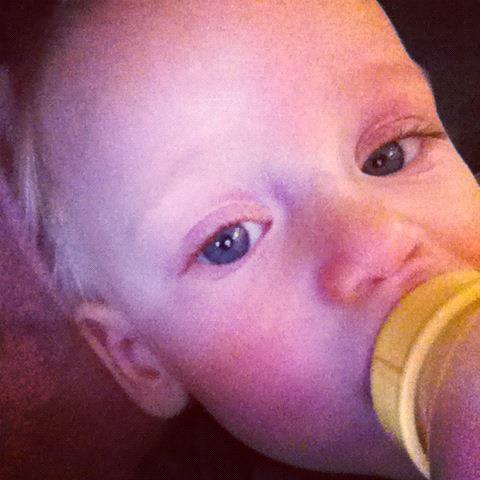 We finished up the weaning process from nursing to bottles and officially stopped nursing on Duke's first birthday.  He transitioned to bottles with formula or breastmilk very well.  (See my other posts on weaning here and here.)

As his first birthday approached, we had to make some decisions.  How exactly were we going to do this whole stop-drinking-out-of-a-bottle-and-drink-cold-milk-out-of-a-sippy-cup thing?  Good question.  (Side note:  Duke has been drinking water/juice out of sippy cups for several months now, so he's very comfortable with the sippy cup itself.)  My original plan was to go cold turkey, straight to a sippy cup with cold milk.  But when I did it, I got all emotional and sad that he wasn't taking it and was going to lose weight and I was a terrible mom, blah blah blah.  So we tried a few other things.

Cold milk in a bottle - Nope.

Formula mixed with a little milk in a bottle - Nope.

Formula mixed with a little milk in a sippy cup - Nope.

You want to know what worked?  Warm milk in a bottle.  (So, obviously it's not that he doesn't like the milk.  He just wants it in a bottle.)  But after visiting with our pediatrician at his one year checkup, we learned this wasn't really what we were supposed to do.  (Luckily, we only did it for 2 days.)  She advised that formula and breastmilk go in bottles and milk goes in sippy cups.  Makes sense.

After talking to her and asking 2,593 questions, we had a plan.  And a plan always makes me feel better.  So once he turned one, we gradually started replacing bottles with sippy cups of milk.  Here's how we did it:

This all happened over the course of 2-3 weeks.

Today is our third day with zero bottles.  Now, don't be mislead.  He's still not really "taking" the sippy cups of milk.  He will take a few swigs of milk out of it at each meal/snack time, but that's it.  I offer it 5 times a day (3 meals and 2 snacks), hoping he will warm up to it faster.  I also give him water so that he doesn't get dehydrated and lots of yogurt to make up for his lack of milk drinking.  Eventually, the goal is to do 3 sippy cups full of milk at meals (20-24 ounces a day) and water or juice during snack time.

What about you guys?  What worked for you?  Did your child like whole milk at first?  Were you nursing or feeding formula beforehand?  How did you transition?
Posted by Claire@MyDevising at 11:22 AM