I'm taking a blogging break for the next several days, so I thought I'd leave you with this guest post by the one and only Colt Westbrook. 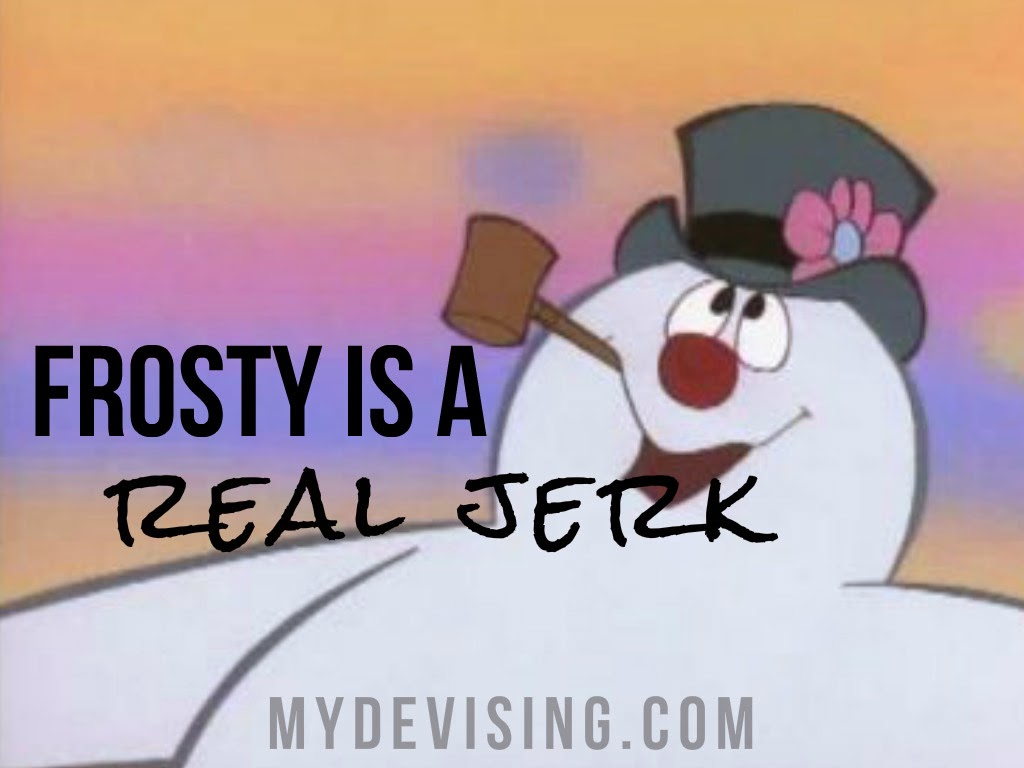 It’s the Christmas season, so I felt like we should be doing something to feel like we were “in the season.”  So, Claire suggested we watch the Frosty the Snowman DVD that we own.

I have never seen the movie so I was excited to see the film that caused all this “magic in the air.”  Just to be clear, I’m talking about the 1969 TV short, Frosty the Snowman.  The movie starts out with this bitter middle-aged, crummy magician doing failed magic for a class full of kids.  They’re not impressed because, well, he sucks.  So he gets mad, storms out, and loses his magic top hat.  Short story shorter, the magic hat ends up on the top of a snowman and makes the snow come alive into a snow human modeled after what sounds like to be a part-time, twice divorced, pilled-up, strip mall security guard.

First thing out of his mouth is “Happy Birthday!” which the screenplay later never really explains.  I may have missed something - either way he sounds dumb.  He then juggles and kids are just SMITTEN.  You want a group of children’s full trust?  Juggle something.  Then he says, “Let’s have a parade!”  Why?  We have no floats ready, you just showed up, and now you’re making some heavy billed demands of the town.  Do you want a True Hollywood Story episode too, mister been-alive-for-a-half-hour?

It gets worse.  It begins to warm up and he starts to melt.  Obviously, he gets a little distraught over it and explains that when he melts, he dies.  The kids look at each other thinking “Well, I guess he’s our problem now...?”

Karen has been in the group of kids the whole time but this is where she steps out into her casted role.  She tries to buy a train ticket to the north pole so Frosty the Freeloader Snowman can stay a snowman.  The bill comes out to be over $1000 (in 1969 dollars).  Frosty whines something like, “aww... I don’t have it.”  Of course you don’t, you’ve never worked a day in your life.  I can’t believe you didn’t say anything when the ticket master was totaling the price up; as if he would have read an amount that you could have paid!  YOU HAVE NO MONEY, BRO.

What does a needy, dependant snowman do?  Train-hops.  He sneaks into a freezer car AND TAKES EIGHT YEAR OLD KAREN WITH HIM.  So, you have this snowman, who has done nothing for anyone and is now making demands of children to save his life, and an eight year old girl trapped in a long distance train ride together.  I hate him.  He’s wreckless, demanding, and has no cognitive knowledge of what he’s asking others to pay to make sure he’s taken care of.

“Aww Karen, are you cold?” he asks the girl who’s shivering and blue in the face.  SHE’S HUMAN AND IN A FREEZER CAR.  YES, SHE’S CHILLY.  They jump the car for some reason and start walking.  It’s really cold wherever they are.  Karen can’t get warm and is going to die because of the thoughtless actions of Frosty the Idiot Snowdouche.  They run into some animals and he gets them to make a fire for Karen to get warm.  He says “I can’t make the fire, ‘cause you know why...”  His selfishness is expected at this point.  Anyway, Karen gets warm, Frosty dies and then Santa comes and brings him back to life and gives everyone a free ride home.

Frosty came into this world, juggled some stuff and threw a parade for himself.  He’s done nothing for anyone else, and then through his actions, says to everyone “Can you fix my problems for me?”  Hey Frosty, get a job, find friends your own age, and just contribute something.

“Happy Birthday!”
Posted by Claire@MyDevising at 8:58 AM