if everyone was a runner (plus a giveaway) 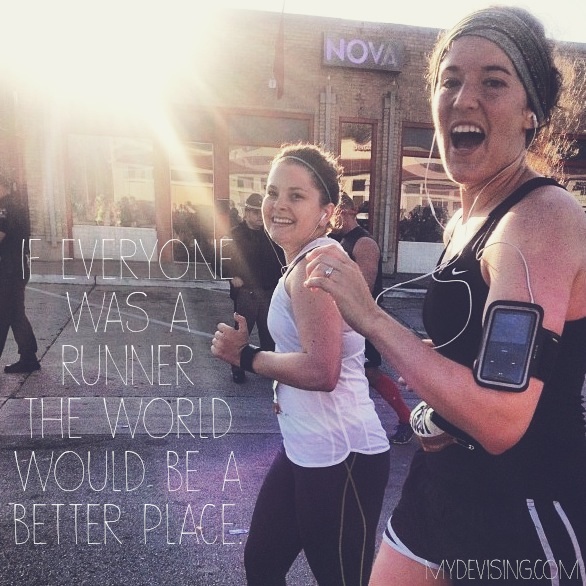 The world would be a better place.

Once upon a time, I didn't know how far a 5k was and I didn't even know things like marathons existed.  My entrance into the running world was in 2010 when I ran my first half.  That's when all those really hard runs paid off and I started considering myself a runner.

Not only do I still enjoy and find so much value in running, but I've gotten to meet, become fast friends with, and grow relationships with other people because of it.

Evan and Kelsey, two of our really good friends, happen to be runners.  Evan is ridiculously fast and I kind of feel famous for knowing him.  (He's also the bass player in our band.)  Kelsey is also crazy fast and someday someday I will be able to run with her.  (And by "run with her" I mean "run 1 mile with her.")

When I started running, these two friends were so supportive of me.  It's no mystery that in the time it takes me to do a certain amount of miles, Evan can do double that amount.  But that's something I love about runners.  It's not just that they're encouraging.  They're encouraging even when they are leaps and bounds better than you and they know it.  (Evan would probably roll his eyes at this and say something like, "No, Claire.  You're so great!  Half marathons are tough!"  See?  Always encouraging.)

I met a fellow OKC blogger about a year ago and since then, we've had a few running chats in person and over Twitter.  Take one look at her and you'll know what kind of runner she is - a good one.  In each short conversation we've had (whether in person or online), it never fails that she finds a way to make me feel like the better runner.  Which is not the case at all.

Another OKC blogger that I recently met at this little get together has also been a huge encouragement to me.  I love reading her posts about running and on every one of mine, she affirms me and makes me feel like I'm doing a great job.

At my MOMS bible study several weeks ago, I started talking with a girl who was behind me in the food line.  We had both run the OKC memorial, so she asked how my run was.  I told her I ran the half, that I beat last year's time, but that it wasn't as awesome as I would've hoped.  She nodded with a face of such understanding and commented with things like, "Well, but it did start to get hot towards the end," or "Yeah, sometimes your legs just quit and you get so tired."  I told her my final time and she said, "Oh, that's great!"  Then she told me that she ran the full marathon.  I don't remember her time, but I do remember wanting to crawl under a rock after feeling like all of my half marathon hardships were nothing to a really fast marathon runner like her.  (And, duh, I should've guessed.  She was petite, lean, and had a great body.  Of course she runs marathons.)

I could write a book about Colt and how he's helped me become better runner.  I come back from 3 mile runs on cloud 9 because I ran a 9:30 pace and he celebrates with me.  He tells me I'm a runner and he makes me feel like I'm a runner, both of which you might not necessarily believe just because you run.  Sometimes you need to be told.

All of these people have listened and pushed me, in big or small ways, even though they're more experienced by a long shot.  They validate me even though they've gone longer distances at much faster paces.  And, to me, the nice feeling of being validated can only be surpassed by being validated by someone who is truly better than you.  It also shows you a great deal about that person.

Humility seems to be the common theme that I find among runners.  Because we all want the same thing:  for each other to keep running.  How fast or strong or awesome you are doesn't seem to be the point.  It's that you run - whether it's 1 mile or 26.2 miles.

After missing my 2:30 goal for the OKC Half Marathon in April, Evan sent me a text, encouraging me in running my next half in November.  Then he said, "You can get 2:30!"  It meant a lot coming from someone who ran the half in 1:29:07 (yeah, I looked up your time, Evan).  Y'all can do the math on that one.

So if you're a seasoned runner, keep dishing out those encouraging words to us slower folks.  Us slower folks will keep encouraging the others that want to run, but just don't think they can.  It's like the Circle of Running Life.

If I haven't convinced you to become a runner, then I don't know what I've done.  Told you about lots of random people that you probably don't care about, I guess.  But in the chance that you're feeling inspired, I have something just for you.

Spartan Race is going to give one of you a free race code to use on any open heat in any Spartan Race in the continental U.S.  (And if you don't win, you can click here to get a 15% off code to use in any Spartan Race.  Good news for all!)  If you're not familiar with Spartan, feel free to browse around on their website and take a look at all of their events.  To enter, all you have to do is comment on this post!  I'll post the winner on Friday, June 21, 2013.  Good luck and happy running!

Posted by Claire@MyDevising at 9:30 AM