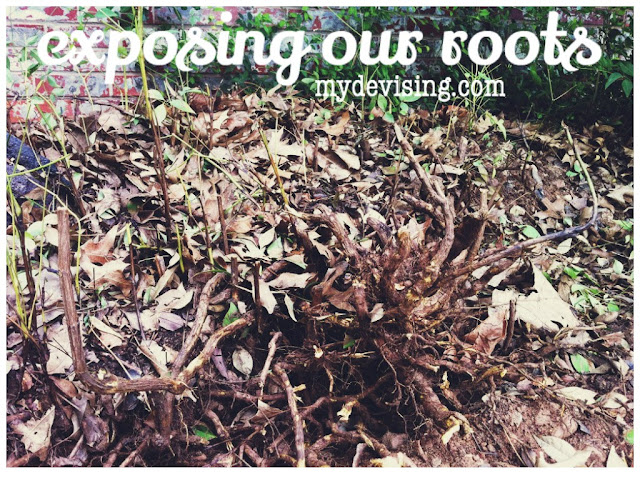 On Friday afternoon, we did some much needed yard work.  Both our front yard and back yard have been screaming for some attention for quite awhile now.  We're attempting to clean things up a bit, take out some things we just don't like, and plant some new things we do like.

On one side of our yard was a nandina bush gone wrong.  I'm sure nandina bushes are great, but this one kind of wasn't.  Its placement appeared to be unplanned, making it look frumpy and ugly.  (Actually, I'm not quite sure if any of our "gardens" were really that thought-through when they were initially made.)

The plan?  Rip it out.  But before Colt could get to the roots, he needed to cut some of the bush back to see what he was dealing with.  I decided to make that my job and I gave digging up the rocks in our gardens to Colt.  (Duh.  I don't have the arms or the abs for that.)

I kind of had to talk myself into attacking this bush.  It was going to be so annoying.  How do I even start?  What should go first?  Now, I've trimmed and cut plenty of bushes, so it's not that I was unaware of how to do it.  It just seemed like an unfeasible and exhausting task.  But I dug in and went for it.  Eventually, I got a good system down.  I could see exactly where the base of some of the plant was coming from and was able to cut closer to the bottom.  It became easier.  I mean, labor-wise, it was still hard and my body was tired, but I was making progress.

As I was cutting, my mind immediately went to this past year and how I learned so much about myself.  Maybe more than I would've cared to know.

When I had my first panic attack last year, I did NOT know what was wrong.  And truthfully, I wanted to know, but I kind of didn't want to know also.  It wasn't an actual physical issue or heart problem, so I knew it was something else - something else that had to do with my mind and how it operates.  That was scary.  That was messy.  That was going to take a lot of undoing and a lot of work.  I didn't want to deal with that.

I had to start at the very beginning.  Why did I have that panic attack in the first place?  I came up with a lot of ideas, but none of them really seemed to be it.  I was trying to think of things that would be quicker fixes than realizing I had issues with anxiety and needed to see a counselor.  But that was exactly it.  I was a person who had gradually let fear creep into my life until it had taken over and I could see nothing else.  (It was a very scary time.  If you missed the whole story, here's the first installment.)

As I began piecing things together on my own and praying a lot, I realized I still needed more help - professional help.  There were things that I couldn't sift through on my own.

It took some guts to make that initial call to say, "Hey, my name is Claire and I'd like to see a counselor for my anxiety."  What would come next?  What would I find out about myself?  What would I have to face?

But I had to start somewhere.

The first visit with my counselor was full of tears and scattered thoughts and completely out of control emotions.  As each session passed, I began to see new ways in which I'd opened the door to fear in my life - what I always allowed my mind to dwell on (even as a child), what I was scared of, the small ways I acted in fear without even knowing it, etc.  These were all the perfect ingredients for a panic attack and anxiety.  It's similar to walking out of your house in May in Oklahoma and sensing tornado weather.  You see the sky and you feel the air.  You don't need a weatherman to say that these are the makings of something that could potentially be very bad.  With my counselor, I was able to see this.  This anxiety and fear didn't just pop up.  The storm had been brewing inside of me for quite some time.

It was tough.  I wanted to un-know some things about me.  But as we continued, it got easier.  We dug down until we found the roots.  I uncovered some basic beliefs that I had adopted at some point along the way in my life - beliefs that were wrong and not okay.

It wasn't fun to begin the process of clipping away at that nandina bush.  When I looked at the crazy overgrown plant, it seemed impossible.  But once I started, I could see better.  I could see the rest of the problems more easily.  It got easier to sift through the limbs and make sense of them.  Soon enough, they were all exposed.  Just the bottoms of that dang naninda bush looking up at the sun, ready for Colt to dig them out.

Unlike the bush, I can't dig the roots of fear out of me forever.  But at least I've found them and I'm aware of their presence.  I know when I'm allowing them to grow.  I know when I start believing lies.

Our yards aren't the only things that need cleaning, bad things taken out, and new things put back in.

I think sometimes we think too highly of ourselves - like we couldn't possibly need outside help.  Surely we can handle things on our own.  Or sometimes we act like our faults or issues are just silly quirks.  "I'm just an anxious person, that's just me!" as we laugh.  But that's not who we're made to be.  If you're in a dark hole of depression or anxiety or whatever else, that doesn't have to be you.  It's okay to ask for help.  Maybe you're scared of what you'll figure out.  But I promise you that what you'll learn and who you'll become is much bigger than the fear of the unknown.  Exposing our roots is worth it.
Posted by Claire@MyDevising at 3:08 PM