the formula for being a perfect mom 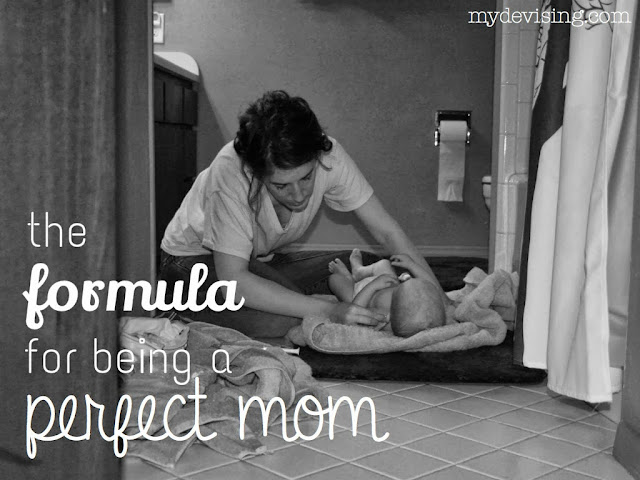 Right after having Duke, I quickly realized the hard of motherhood.  The exhaustion of not getting any sleep, the constant on-the-clock "ness" of it, the never-ending spit up, the nap schedules, the demands of breastfeeding, the confusion of PPD.  This was hard, and it was a really hard kind of hard because it was a person, a life, we were dealing with here.

But now that Duke is almost two and most of those things are nonexistent, I'm beginning to see another side of the hard.  I'm starting to see this blonde-haired, blue-eyed toddler become a person.  I see him think about things, I observe as he processes the world around him, I hear him repeat every word we say, and I watch as he expresses his emotions - whether happy, hurt, excited, frustrated, or downright mad.  He has a personality and he's becoming a little boy.

When I think about the hard of motherhood right now, it's all centered around the belief that everything I do (or don't do) is making Duke into who he will be in 20+ years.

That is a lot of pressure.

I approach each situation we come across and immediately view the long-term effects in my head.  It feels like every little choice I make in parenting is a huge building block in who I'm helping Duke become.

If I give in to a fit right now, I am endorsing the "you can always get what you want" philosophy.

If I run to him and pick him up after he falls down, I am sending a message that he's not tough or can't deal with pain on his own.

Or, if I don't run to him and pick him up after he falls down, I am not showing him love and I'm not assuring him that I'm there for him.

Way too much thinking going on.  It's exhausting, really.  I think a lot of you moms can relate.

We're reading a book called "Desperate" in our MOMS bible study and I love what she says here:


"I see so many young women today who live by fear - fear of what others will think, fear of how they might ruin their children, fear of the expectations of other people, fear that they will not fill in all the holes in their children's lives.  I also see women who are afraid to be themselves."

I couldn't underline that passage enough.

All of this pressure we place on ourselves as moms comes from one place:  Fear.  Fear that things aren't going to turn out well or the way we would've liked.  Fear can wear many different hats - being scared of everything, being extremely controlling, living in a constant state of worry, always concerned about what people think, etc.

We fear because somewhere deep down we think we actually may know best, which is an obvious indicator of where fear is birthed.  Pride.

And when I think about one thing I do not want my kids learning from me, it's pride.  Pride is ugly.  Pride doesn't have friends, it doesn't serve selflessly, it doesn't encourage, it doesn't have compassion, and it doesn't lead with grace.  The last thing I want to do is parent out of a place of fear or pride.

My kind of personality loves formulas.  I like plans and I like things to make sense.  But in parenting, there is a lot of gray.  And not just within the world of your child, but within the entire world of parenting.  Two sets of parents can do things differently and both of them can still be right.  Two sets of parents can do things the exact same way and yield completely different results.  This complicates things because it means there is not one set of answers for everything.  You can't rely on a formula and you can't do everything the same way every single time with every single child.

There's just no formula when it comes to being the perfect mom.

And here's the deal.  Even if there was a right way to do things or a flawless way of parenting, there would still be no guarantee that my child would turn out perfectly, making all the right decisions, having compassion for all the people, saying all the nice things, and accomplishing all the goals.  And if this is the case - that even the most perfect parenting may not create the perfect child - then why do I get myself so worked up?

(Side Note:  This is why I don't pin or read anything along the lines of "30 things you should tell your daughter before she's 18."  1.  It's just way too much to process or handle.  2.  It creates this desire in me to latch on to and believe in some formula.  Hear me, those articles are not wrong.  I just can't deal with them.)

I've come to this conclusion:  The Spirit is the formula.

I'm truly trying to reorganize my thinking in all of this - to not fall into the path of my own pride by fearing what I don't know or might not be able to fix.  The only thing I can rest in is that I'm doing my best and I'm trusting God through all of it.  I'm involving him and asking him to be a part of this mothering thing.  I pray about the hard stuff, ask Him about the hard stuff, search Him for answers, listen to the Spirit's guidance.

(If you think that sounds unreasonable and too churchy, I challenge you to try it out.  Genuinely talk to God and genuinely believe He will answer.  You may be surprised.)

Formulas don't work in parenting, but leaning into the Spirit always works.  Let's stop comparing our children and our parenting skills and realize that every child, every parent, and every situation is different.  Let's stop trying to parent perfectly for fear that our child might not turn out the way we want.  Let's listen to our children, give them our time, show them an abundance of love, and encourage them to be who God has made them to be.
Posted by Claire@MyDevising at 2:39 PM