a glimpse of courage in duke

What is it about seeing your child act courageously that makes you want to bawl like a baby?

I got a glimpse of this when Duke got his first and (so far) only stitches back in January of 2013.

I got another glimpse of this at his 2-year-old well check when he choked back tears with quivering lips.  He was uncomfortable and didn't want that silly instrument in his ears, but he knew it needed to be done.  And he knew I was right there with him.  I saw him swallow back the urge to scream and fight.

The most recent glimpse of this was at the eye doctor.

Duke had been doing a few things that made me question the health of his eyes.  I didn't know if it was an actual vision issue or if there was just something irritating him.  Either way, my pediatrician advised me that if I got that feeling in my "mom gut" to get him checked out, then I should do it.

I really had no idea what to expect.  I've only had glasses/contacts since my senior year of high school.  Thinking about a little person like Duke getting his eyes checked seemed practically impossible.  How would they accomplish this task with a squirmy toddler?

My nerves subsided when we walked in the door and were greeted by 4 young women with smiling faces behind the desk.  They had this kid thing down.  And, of course, there was a little aquarium that stole Duke's attention from the start.  We watched the fish swim around until they finally called us back.

After talking with the nurse a bit, she informed me that in order to check the health of the eyes at this age, they'd need to dilate them.  I hate getting my eyes dilated the one time per year I have to do it so I knew Duke wouldn't be a huge fan.  Although he whined a bit while the eye drops were going in, he quickly calmed down when he noticed a huge jar of chocolate in front of his face.  The nurse said he could have a piece of chocolate since he did such a great job.  He looked at her, looked at me, and then said, "One?"  (We're big into "one" around here.  Just one cookie.  Just one gummy vitamin.  Just one more drink.)  "Yeah!  You can have one!" I said.

Duke opened his Reese's peanut butter cup, the nurse turned on Toy Story, and we waited for the doctor.  (Again, they had this kid thing down.)

The doctor came in and asked Duke to sit in the chair.  I thought, there's no way, mister.  And just then, Duke gladly climbed into the chair as if he'd done it a million times before.  He held my hand and sat so bravely as the doctor peeked into his eyes using weird objects he'd never seen before.

I was so proud of him.

As I drove home and replayed the events over and over, I thought about what goes on in MY mind when I'm having to choose bravery over fear - the dismissal of negativity, the focus on the truth, the ability to know that it's going to be okay, etc.  Now, I know a 2-year-old isn't thinking about these things like I am, but his wheels were still turning.  He was having to decide if he was going to cry or if he was going to be okay.  Something in him said it would be fine.  I'm holding my mom's hand and she's right here and I'll be fine.  I don't know what's going on but I trust her.

Watching him sit there like a big (yet so small in the scheme of life) boy made my heart jump and, at the same time, made me want to weep at how precious this whole motherhood thing is.  It's incomparable to any other relationship or feeling I've ever experienced.  I know there will be many more joys to come in this parenting gig.  But right now, in my current stage of life, I'm celebrating small moments like this.

If you're wanting to know how it all turned out, he is actually farsighted just like me.  His doctor told me it was a good decision to bring him in.  Although there isn't anything to be done at this point, we know that we will need to get him checked again in a year.  (P.S. I'm learning that your "mom gut" is actually the Spirit giving you insight.  Intuition schmintution.  It's the Holy Spirit, y'all.)

After we walked out into the bright daylight with his awesome my-eyes-just-got-dilated sunglasses on, I decided this occasion deserved a "special."  We headed straight to Starbucks.  Duke got an apple juice and I got a decaf white mocha. 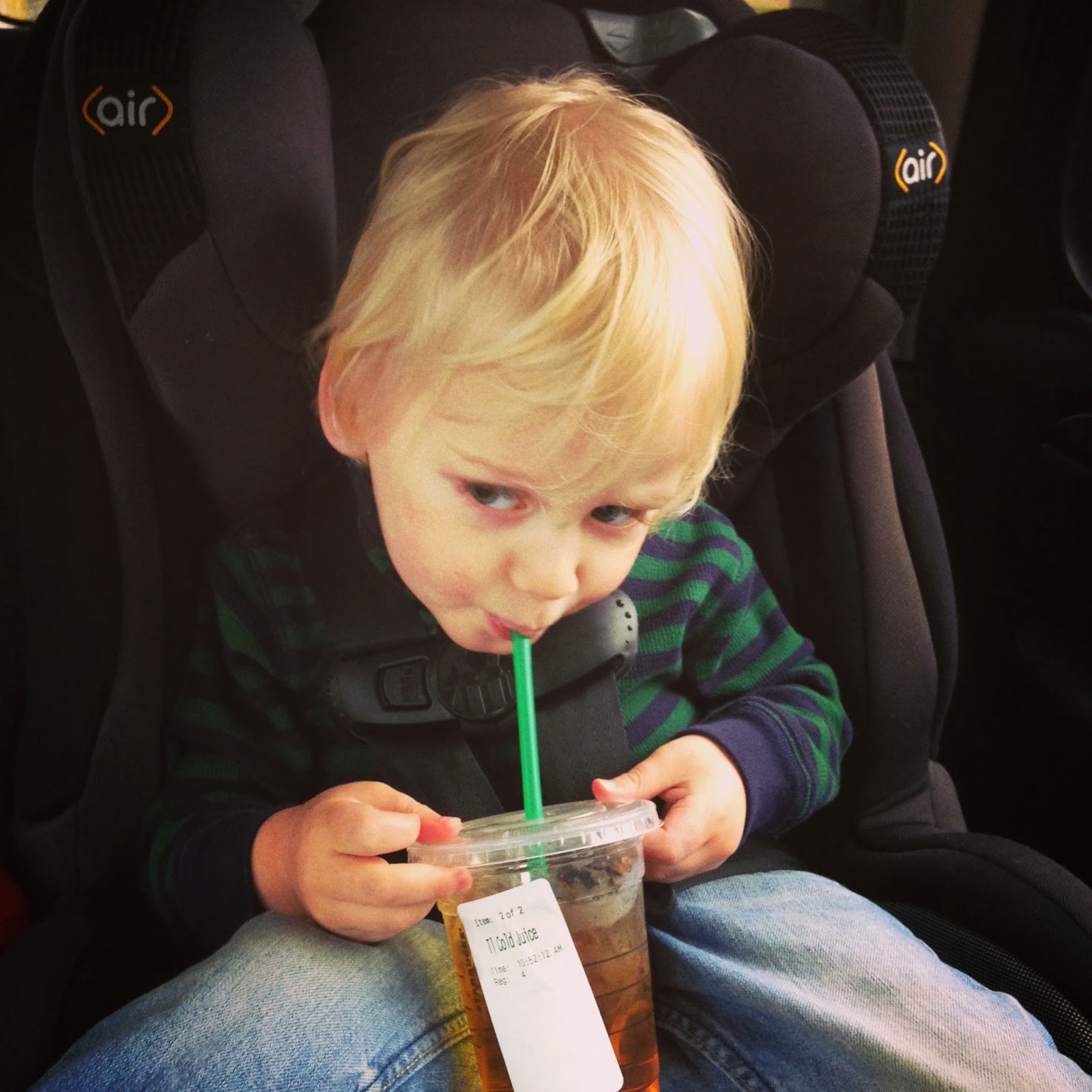 You know, this is really such a small event on the timeline of life when you zoom out.  Yet, I know that who Duke was on this day will forever be imprinted on my brain and in my heart.

Oh, Duke, if there was anything I could magically inject into you (besides a true love for God and an understanding of His love for you) it would be courage.  I pray, pray, pray God gives you dose after dose of it.
Posted by Claire@MyDevising at 5:18 PM