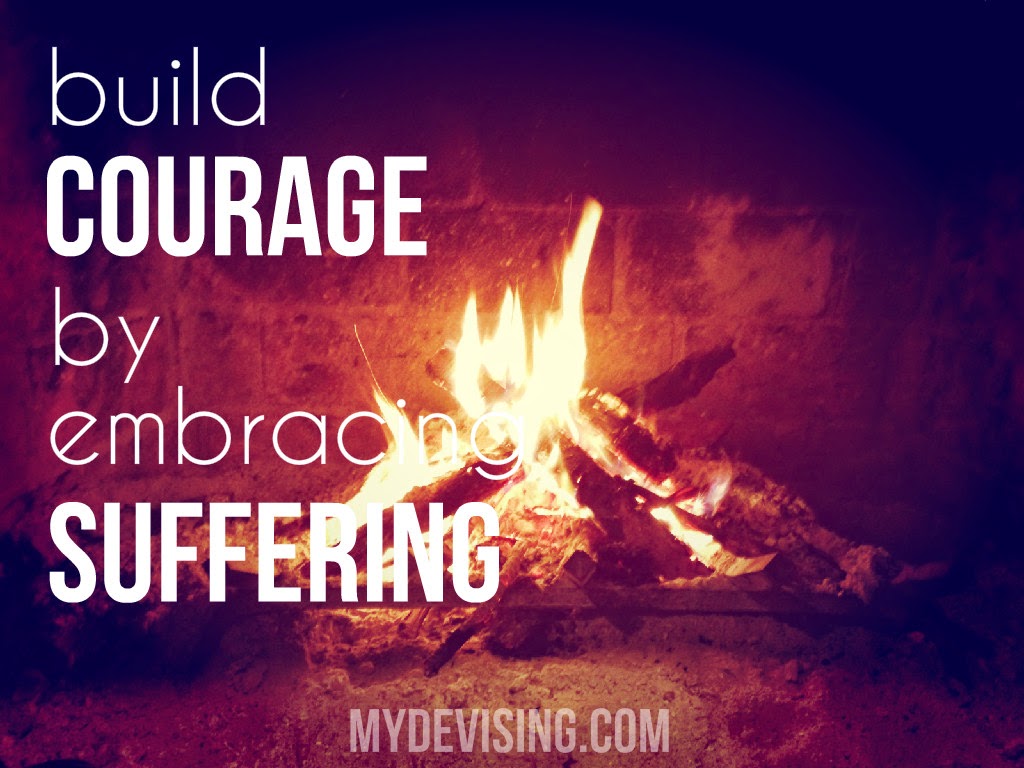 "I believe in miracles and I want the courage to always ask for them.  I'm going to be more open to risk.  I'm going to listen more to what I think the Spirit is saying."

I wrote those words in my journal at the beginning of last year.  I decided my word for 2014 would be courage.

Asking for miracles is a gutsy thing.  You have to be prepared for the outcome.  Many of us don't ask for miracles - not because we're afraid the miracle won't happen, but because we're afraid of the questions we'll have to face if it doesn't.  What if God doesn't come through?  What does that say about him?  And what do I believe about him?  Is he still good?  Sometimes asking for miracles forces us to get to know ourselves a little better, and it's not always a pretty thing.

It's dangerous to pray for healing and plead for circumstances to be changed.  By doing so, you put yourself out there, become vulnerable, and give up control.  Many of us know this feeling.  We've felt it in relationships with people.  If I say I love her, what will happen?  What if she doesn't say it back?  What will I do?  What will that mean for us?  Sometimes that doubt is enough to freeze us, to stop us from doing what we really want to do.

But in 2014, I tried to fight that doubt.  I prayed for miracles and I saw some.  A precious friend finally had a baby after a long time of trying.  Colt got a dream job.  Many people at our church with physical ailments were healed through prayer.  Things that seemed impossible were suddenly a reality.  My heart was so thankful.

That's the happy and easy side of miracles.

The other side is the let-down you feel after praying for something and not getting it.  I trusted that when I prayed, asked for things, and begged for change, God listened.  And the scariest part - I believed that God would deliver the miracles.  I believed God would bring Nova to me every day for 2 weeks before she came.  I believed God would finally get me from a 9 to a 10 so that I could push that sweet baby out without an epidural.  I believed God would heal whatever issue was going on with our nursing situation.  None of those things happened.

But that's the risk we take.  We can't only be on Team God when life is looking bright and perfect.

As I was reading through some of my written journal entries to reflect on the year, I came across these notes from a sermon last January.  "Take courageous action - embrace suffering."

Looking back, I believe that dealing with and (eventually) embracing the suffering and disappointment I experienced with Nova's birth and nursing journey was the courage I was supposed to learn.  It's the kind of courage that doesn't feel awesome.  It doesn't look cool or seem brave.  But sometimes the most courageous person you can be is a person who takes in a situation fully, deals with it, asks hard questions, seeks wisdom, and, ultimately, comes out on the other side.  The other side could be some victorious mountain and the feeling of conquering.  Or the other side could be a quiet hill with not much to show for your work, yet you know in your soul that you fought til the death to find the good in the situation and hang on to God as best as you could even when you were filled with doubt.  Sometimes hanging on to that mustard seed of faith is all we can do.  That is courage.

Or maybe some of you relate to me.  Maybe embracing the suffering in your life and hanging onto your faith by one little single thread is the most courageous act you can muster up.

So what does it mean to "embrace suffering"?  To me, it means:

1.  You trust that there's a bigger picture than where you're at right now.  You trust that you can't possibly stay where you are forever.  It's just not possible.  You maybe don't feel that truth, but you know it.

3.  You fight to continue being the person that God has created you to be even while you're struggling.  You don't get lazy and take a break from who you were pushing to be just because things just got really hard.  You stay focused, knowing that God will restore the things about you that seem to have suddenly become unstable.

This is all hard stuff to do, and it's only in reflecting on what I did (and also what I didn't do in some instances) that I realize these are the things that will benefit me as I deal with my sufferings and my relationship with God simultaneously.

I love picking a word for the new year.  You choose it not knowing what it will mean for you but trusting that it will mean something.  If you haven't ever done it, you should give it a shot.  I'm in the process of writing about my word for this year, and I look forward to sharing it in the next week or so.

Email ThisBlogThis!Share to TwitterShare to FacebookShare to Pinterest
Labels: God, SPIRITUALITY, word of the year