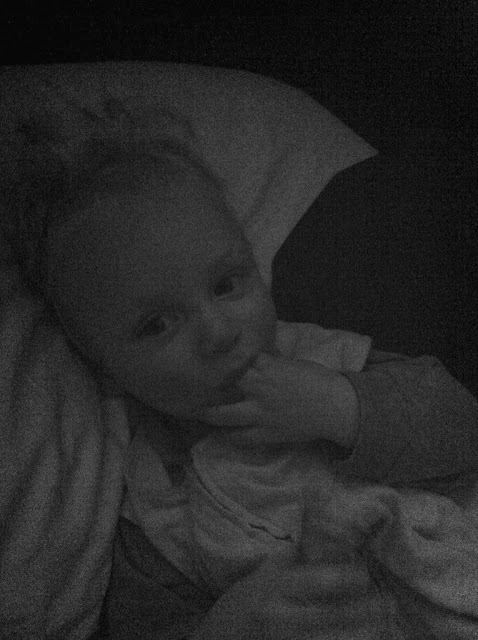 For those of you in the work force, this is a stay-at-home mom's version of a "lunch break."  This is the one time we don't have to "work."  (And by "work," I specifically mean doing things with/for our child.  Because we all know there are dishes to unload, floors to pick up, beds to make, showers to take, and laundry to fold.  Always.)

So what happens when nap time doesn't go as expected?

I will say, we have been blessed.  Duke has been a really good sleeper from the beginning.  He slept 7-8 hours at night around 7-8 weeks.  He didn't drop his 3rd nap until he was 10 months.  He moved to one nap at 15 1/2 months.  In the world of sleeping, he's pretty "by the book."  This is NOT to say that we didn't have days of frustrating naps or 45-minute intruders or whatever else there is.  We have had bad days, for sure.  But for the most part, Duke loves his sleep.

The trick with the stage he's entered into now is that he's taking one nap.  That's all we've got, folks.  While I still stand by the belief that one nap a day really is nice, it does feel like the pressure is on.

The issue isn't that Duke will be a monster if he doesn't get the perfect amount of sleep.  Actually I've noticed the past few months that if he gets a longer/shorter nap, it doesn't really influence his level of fussiness.  It seems that he can be as fussy or as content as he chooses to be.  Welcome to toddler-hood, I suppose.

The issue is that mama doesn't get a break.  Or as long of a break as she might have wanted.

I mean, 2 hours is nice.  Sure, it's an acceptable nap.  I realize it could be worse.  But when you're expecting 3 hours, 2 hours makes you start questioning your life and purpose here on this earth.

I'd be fine with accepting this as our new normal, however, Duke doesn't seem to be satisfied either.  Rather than waking up happy and talking in his bed, he cries.  So to me, it doesn't seem like he's gotten the amount of rest he needs.  And trust me, I give plenty of time for him to calm down and fall back asleep, but it just doesn't happen.

Two days ago, I actually thought about running into his room, shouting, "Go back to sleep!" and then slamming the door.  Mom of the year, y'all.  Luckily, my logic caught me before I acted like I was 13 years old.

Instead, I texted Kelsey.  Because when you feel crazy and think the mental asylum should take you away, you have to text people.  It's your lifeline.

In summary, I have no idea what's going on.  Here's what I do know:

We did recently get rid of the sleep sack during nap time, but he had several successful naps without it before this craziness started.  So I'm pretty positive it's not that.  (And even if that was the issue, the sleep sack is still bye-bye.  It's getting hot outside and his feet had poked holes through the bottom of it.  It's time.)

All of that effort for just one extra hour of sleep?  Yes.

In mom world, it's easy (and relieving) to just blame issues like this on growth spurts or teething.  But my gut tells me it's neither.

So while this unsolved mystery continues, I have some questions for you.  Help a mom out, moms!

Did your 18 month old ever go through a weird nap phase?  What did you do?  What time was/is nap time for your toddler?  How long does his/her nap typically last?
Posted by Claire@MyDevising at 7:58 AM

Email ThisBlogThis!Share to TwitterShare to FacebookShare to Pinterest
Labels: BABY/TODDLER