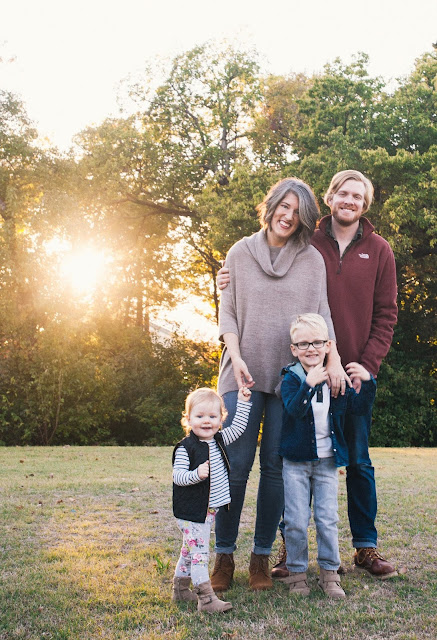 I ended 2015 as a 29 year old woman, a wife that is more happily than ever married to Colt, and a mom with two precious kids, 4 and 1.5 years old.  We love our home and the Lord has provided everything we've needed.  We are surrounded by close family, precious friends, an unbelievably wonderful church, and a loving community group.  2015 has been a good year.  Here are some highlights:

We met up with the Watsons in California for vacation.
We swapped our dining room and music room.
I wrapped up the Nursing Nova blog series (along with my emotions and misplaced frustrations).
Nova finally got tubes and, while there were a few infections that followed, the tubes have saved our lives and our sanity.
I pooped my way through ran the relay in the OKC Memorial Marathon.
Colt added on the side gig of becoming the youth pastor at our church.
We went to Maui with my family.
After a 4 year process, we released our first EP as Mopak and played a really fun release show. (Listen to the EP on Spotify!)
I got better at saying no.
I got to write once for Gospel Centered Discipleship and once for For Every Mom.
I had my first commission to write a lullaby for a long time friend's baby girl.
We said goodbye to Colt's sweet Nana who lived such a God-honoring life.
Colt and I celebrated our 7th wedding anniversary.
I cut my hair off.
We paid off Colt's student loans.
We started working on a set of my songs for our next EP.
I went to the movies for the first time in 3.5 years.

In 2015, I wrote 79 blog posts.  That number is considerably smaller than previous years, but I'm okay with that.  These were some of my most-read and/or personal favorite posts:

These were my resolutions for 2015:

wear my retainer at night more often
Hit and miss on this.  I wore it more, yes, but not as much as I'd hoped.

have both bathrooms semi-updated
We didn't do much to our master bath this year except for add a new rug and organize the shelves.  But in our guest bath, we painted the wood trim white, painted the walls grey, got new rugs, got a new shower curtain, and added a cute photo of the kids on the wall.

finish writing my album
Yes!  All songs are written with a few tweaks left.  Currently, we've got 2 of the 6 figured out as a band.  Practices are scheduled each month and hopefully we'll head into the studio in the next few months.

spend some kind of time with God consistently
This happened much more.  When I wrote this goal, I thought that I'd either land on doing it before kids wake up or after they go to bed.  What I ended up deciding is that spending time with the Lord in the morning is the best - but not necessarily before they wake up.  Most of the time, when I get up before the kids, there is some kind of silent alarm that goes off in their rooms, telling them that they should also get up.  It's weird.  I get up before them, they wake up early.  I get up with them, we all get up at 8-8:30.  It became more of a stress and frustration trying to get up early and beat the clock.  What works best for me right now is getting the kids fed, cleaned up, and down to play.  After that, I sit down at the table with my breakfast, journal, and bible/bible study/devotional.  It's a noisy, interrupted time, but it's also special because my kids see me do it.  For now and in this season, it works best like this.

In Life.  I saw surrender play out in saying no.  I talked about that in this post.  I learned that saying no is good and necessary.  Maybe the most important part, though, is realizing that I don't have to feel guilty for saying no.  For my sanity, my emotional limit, and the health of my family, I have to say no to the things that bog us down, busy us up, and make us crazy.  That took surrender – surrendering a "yes," surrendering the outcome of saying no, and maybe even surrendering a desire that just didn't fit in this season.

In Marriage.  I can certainly say that there is more of an ease to our marriage as we enter into this year as compared to last year.  I can feel the growth and the change.  More surrender, more giving in, more apologizing, more serving, more giving up of what we want for the sake of the other.  I am married to a great man who is a leader in all of these things so I consider myself very blessed.

In Friendships.  I saw the fruit of surrender here.  I saw what happens when you give of yourself, your time, and your resources.  We're all bound to be at rock bottom at some point.  I've had my moments and the way my friends rushed in during those times will never be forgotten.  I got to be on the other end of that many times this year and it was so rewarding.  It's a privilege to walk alongside people in their burdens.  It's just what Jesus wants us to do and when we do it, it is incredibly fulfilling.  Yes, you have to give things up to do it, but the return is so much greater.

In Motherhood.  I've discovered that I feel the most frustrated, alone, exhausted, fed up, and numb on days that I'm doing too much, expecting too much, or only focusing on myself.  Of course, all of those emotions are normal to feel as a mom, but what I do and how I react because of those emotions is where I mess up a lot of times.  I usually have the wrong response.  Occasionally, very occasionally, I can look inside of myself, find the deeper issue, and make a change.  On those days, I win.  I find the piece of me that needs to surrender.  For example, a few days ago I was having one of those days.  I was so done with all of it.  One more making of a lunch was going to kill me.  One more "Can you say that to me in a different way?" was going to make me pop.  But the next day?  I was fine.  It was easier.  I liked my kids more.  The difference?  I surrendered some of my time to make sure I spent time with God and I surrendered thoughts of what I wished I was doing or what I felt like every other person was doing and focused on what I was actually doing.  When we hand things over and give things up that aren't meant to be held in our brains and hearts, life works better.

I love picking a word at the beginning of each year because it gives me something to focus on.  I saw this word on my wall every day.  Some days, I put it into action.  Some days, I didn't.  But I'm so thankful for the days I did and for the constant reminder of how important surrender is in so many different areas of my life.
Posted by Claire@MyDevising at 4:34 PM

Email ThisBlogThis!Share to TwitterShare to FacebookShare to Pinterest
Labels: BLOGGING/WRITING, holidays, MISCELLANEOUS, word of the year